Join us for engaging panel discussions and dialog on the building of Web 3.0 with leaders from applications, protocols, infrastructure and service providers.

Thank you for your interest in Atlas x Fundamental Labs Building of Web 3.0 Event, at this time our event has reached the maximum capacity.

We would like to see you in future events, so please enter your details below. 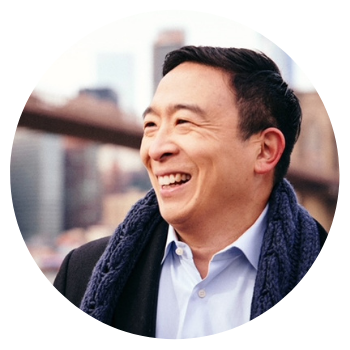 Welcome back: Day One recap by Raymond Yuan, CTH Group

Tackling the “S” in ESG:

Hear from industry practitioners from applications to protocols, infrastructure providers to service providers as we dive into the opportunities, challenges and outlook for this exciting industry.

Former US presidential and NYC mayoral candidate, Andrew Yang, who has been a vocal advocate for the growth of Web 3.0 will be our featured dinner speaker on Day One.

More details on all of our sessions will follow shortly, but don't delay to secure your seat. It's by invitation only and there will be limited seats.

Andrew Yang is an entrepreneur, author, philanthropist, non-profit leader, and former US presidential and NYC mayoral candidate. After working in corporate as a lawyer and also as the CEO of an education company that became #1 in the country, Andrew started a national entrepreneurship non-profit, Venture for America, which worked to empower thousands of young entrepreneurs to bring economic dynamism to cities like Detroit, Cleveland, Baltimore, Birmingham, St. Louis, and others around the country.

Leading the organization to become a national multi-million dollar charity, Andrew was named a Presidential Ambassador of Entrepreneurship by the White House under the Obama administration and a Champion of Change for his leadership. After seeing the devastation that automation and the fourth industrial revolution were doing to the American workforce, Andrew decided to run for President in late 2017. He participated in seven Democratic primary debates, outpolling and outlasting six senators, four governors, three members of congress, two mayors, and one secretary. As an activist, Andrew has turned his movement into a political reality, launching a non-profit, Humanity Forward, that has successfully lobbied Congress to bring billions of dollars in cash relief and stimulus checks to millions of Americans in need.

His current projects include founding the Forward party, a third-party aimed at democracy reform, and Lobby3, a new advocacy organization to inform Washington DC of Web3’s ability to eradicate poverty. Andrew is the author of three books, including his newest work, Forward, and host of a weekly podcast, Forward.